Hazelton Art Works uses archival-quality giclée reproductions of the original painting. Our giclée art is an incredibly accurate and vibrant portrayal of original painting.  Each one is printed on rich textured canvas which makes it difficult to distinguish from an original. The artist signs and dates each one. Please note that the colors may vary depending on your computer monitor.  The frame is painted onto the canvas so no need for added expense. 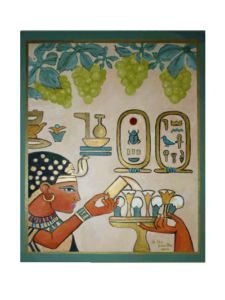 Inspired by an ancient Egyptian hieroglyph.  The woman is celebrating with three glasses of golden beer and above are  grapes symbolizing wine.

“Alcohol was prevalent in ancient Egypt, especially in the form of beer. Beer was made from barley, honey, herbs and spices, and was drunk in preference to water. This was likely due to the bacteria in the Nile water, which required boiling to purify it; part of the brewing process involved boiling, along side the fermentation process, served to kill off such bacteria and provide a safe beverage for daily consumption. Wine was the drink of the wealthy, as it was an exotic commodity in ancient times. Alcohol was part of ancient Egyptian culture from the earliest times: fragments of numerous ceramic beer and wine jars were found at subsidiary burials, all labelled with the name of King Aha I of the First Dynasty. According to John F. Nunn (2002) in Ancient Egyptian Medicine, beer and wine were both used as carriers for medicines. Drunkenness was not generally considered to be virtue, yet Carolyn Graves-Brown (2010) in her book Dancing for Hathor notes that “…’holy intoxication’ was encouraged, possibly as a link to the world of the gods, an alternative state of being”. As such, the ‘Festival of Drunkenness’ (tekhi) was celebrated during the first month of the ancient Egyptian year, in honour of the goddess Sekhmet. Alcohol was therefore not only a daily necessity of life in ancient Egypt, but was also a link to the gods.

There are no reviews yet.

Only logged in customers who have purchased this product may leave a review.