Everybody is excited about the total solar eclipse happening tomorrow August 21, 2017.   We can relate!  Enjoy this article relating the winged disc to the solar eclipse. 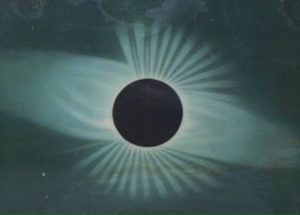 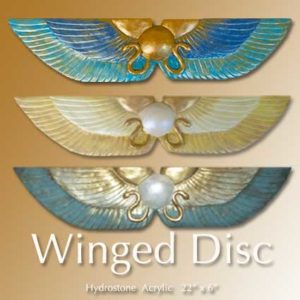 The Internet Archive could have done a better job of archiving the illustrations for my ‘The Winged Eye Symbol’ but I am not about to complain. I am thankful that anything at all was preserved for posterity. Here is the full text with new embedded links and some appropriate illustrations some of which are new –

It should be quite evident from the captioned pictures of the “winged eye” symbols shown above (Author’s note: Sorry not currently available. . .) that the ancient “winged eye” religious symbol is a composite symbol which synthesizes the so-called “Eye of God“, that is dramatically manifested in the skies above our planet Earth during most total solar eclipses, with the “winged disk” or “Bird of the Sun” that is readily perceivable within the sun’s corona during those total solar eclipses during which the “plumes” and streamers of the sun’s corona are concentrated into the sun’s equatorial regions like “angels’ wings”. This idea is perhaps most readily demonstrable in terms of the ancient Egyptian versions of the “winged eye” symbol, although it should also be quite evident that the Mayans and Aztecs of Mesoamerica, the Nazca of Peru, the “Southern Cult”, and a diversity of other ancient cultures developed their own “winged eye” religious symbols as a result of their own observations of the awe-inspiring “Eye of God” and the radiant “Bird of the Sun” that are manifested in the heavens during total solar eclipses.

Well over a century ago, the British astronomer Edward Walter Maunder published his theory that the winged sun disk symbol of ancient Egypt, as well as what he called the “ring with wings” solar disk symbols of Assyria and other ancient Mesopotamian civilizations, were inspired by a remarkable bird-like pattern that is quite readily perceivable within the sun’s coronal halo during total solar eclipses that occur during the minimum phase of sunspot activity. Besides inspiring ancient Egypt’s ubiquitous winged sun disk symbol, this coronal “Bird of the Sun” was quite evidently the inspiration for Horus, the solar falcon god of Egypt, as well as the Egyptian bennu bird which we know as the Phoenix bird of classical Greek myth.

The Egyptian religious myth of the cosmic battle between the solar falcon god Horus and the sun eating serpent god Set (or Apop) was also evidently inspired by the total eclipse of the sun as E. A. Wallis Budge, Curator of Egyptian and Assyrian Antiquities at the British Museum, proposed in his translation of ‘The Egyptian Book of the Dead’ at the turn of the 20th century. In fact, the solar falcon god Horus is quite literally described as taking on the form of a “great winged disk” in some versions of this ancient Egyptian religious myth inspired by total solar eclipses. 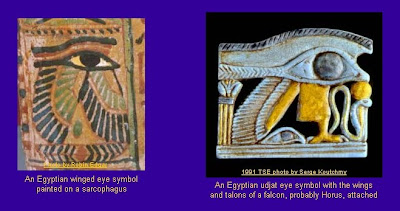 Two Egyptian winged eye symbols in a screen shot from my
archived ‘The Winged Eye Symbol’ eclipsology “web sight”.
The Egyptian version of the winged eye symbol is thus essentially little more than a modest variation of the “Eye of Horus” symbol or the very similar udjat eye symbol (aka wadjet eye) to which the wings, and sometimes even the talons, of the solar falcon god Horus have been attached. In fact, it might actually make rather more sense, and perhaps even strike considerably closer to the actual ancient truth, to propose that the “Eye of Horus” symbol of Egypt is actually a total solar eclipse inspired “winged eye” symbol that has had the bird wings, tail, and any other body parts of the solar falcon god Horus, removed from it in order to emphasize the god’s attribute of divine watchfulness and protection that was inspired by the genuinely striking similarity in appearance of the totally eclipsed sun to an “Eye of God”.

A rather murky but still quite viewable scientific astronomical illustration of the 1878 total eclipse of the sun that was drawn by Ettiene Leopold Trouvelot at Creston, Wyoming, also reveals how the “winged eye” symbol is a composite symbol which synthesizes the total solar eclipse “Eye of God” (aka “Eye of Horus”) with the sun’s coronal “wings”. The much “cleaner” astronomical line drawing below, that was also done by E. L. Trouvelot, was used by British astronomer Edward Walter Maunder to illustrate his article titled ‘An Old Record of the Corona’ which was published in ‘Knowledge’ magazine on New Year’s Day 1897. Maunder astutely pointed out how the “fan of light” formed by the corona’s polar rays had a “practically perfect” “resemblance” to the “kilts” worn by Assyrian deities which also formed the bird-like tail of most Assyrian “ring with wings” religious symbols. Maunder commented, “If this be a mere chance coincidence it seems to me to be a most extraordinary one.” 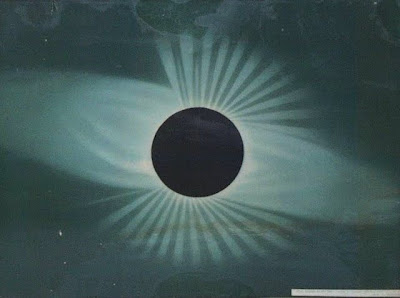 This astronomical drawing of a 19th century total solar eclipse
observed at Creston Wyoming by Ettiene Leopold Trouvelot
reveals the origin of the winged eye symbol of ancient Egypt.
It would appear that E. Walter Maunder either completely failed to notice, or chose not to point out, the “most extraordinary” “coincidence” of the “practically perfect” “resemblance” of the totally eclipsed sun’s coronal “fan of light” surrounding the black pupil-like disk of the moon to the iris of an “Eye in the Sky” or “Eye of God”. ”  posted by Robin Edgar